skip to main | skip to sidebar

I'm not abandoning my blog.

Well, I have just had a lot on my plate. And the focus of my blog keeps changing. My son is 3.5 years old now, and my last post was about potty training. Well, he's finally starting to come around. And he actually pooped for the first time last week. I am using a lot of treats to get him started, but until this point he was coming up to me and telling me he pooped in his diaper, so I figured it was time to really commit to it.

I just gave birth at the end of July to my new son. He's now 6 weeks old and just a little cutie pie! He's a much fussier baby than Zach was. Well, I should say, in retrospect that the sensory problems really made Zach a laid back baby. He could care less if he was in a dirty diaper, and temperature changes never bothered him. My new guy can't stand the heat, as it's been so humid here. It actually was the worst summer to be pregnant in my area.

I've been attending support group meetings for the Sensory Processing Disorder. It's been SO USEFUL. I encourage any of you, if you are in the same boat to find one. This week there will be a speaker from the Development center to talk about whether you should have your child evaluated. I'm still on the fence. Our therapists have suggested that he may have a little ADHD going on, and that we should have a professional evaluate him. I do notice that when we are out in public, his behavior is much more hyper than a lot of kids that look his age. So, we'll see. It's a constant learning experience. He started gymnastics last week, and it was a challenge to get him to sit and wait for directions and to follow them, even though he really liked what they were doing and actually repeated the guy. I wonder how difficult school will be for him.

So, with that said, since this summer has been so crazy... My garden didn't do well at all!! It was disappointing, but truthfully, I probably didn't water it as well as I should. I didn't make it to the farmer's market either, which I'm bummed out about, and I seemed to have lost my passion for cooking. So, I'm trying to get that back.

So, hopefully I'll be able to come up with some posts sooner than I have been. I'm back in the cloth diaper market, so perhaps I will write about them again too!
Posted by Jen at 12:05 AM 3 comments:

My son is 31 months old. He has recently shown an interest in potty training. In the past week he's peed in the potty several times. I even purchased him some dinosaur underwear, which he was very psyched about. It seems as though he is very inconsistent about this. He does much better to notice that he has to go when he's naked or wearing the underwear, otherwise the diaper is on and he goes about his business. I have an M&M jar, (which he calls M's) that he gets some if he uses the potty. I think he is still figuring out that there is a difference between pee and poop. He calls it all 'poopy'. And, he's yet to go to the bathroom sitting on the potty, he straddles it and pees standing up.. which is hysterical.

So, to all you mom's.. I assume the inconsistency is normal? But how do you get them to go more regularly? Or do you just wait until they're ready?
Posted by Jen at 5:05 PM 6 comments:

My son is currently 2 1/2 years old. When he 18 months, I started to get concerned that he wasn't really talking. He grunted alot and was able to communicate well with you, but just never used any words. My doctor said, "He's a boy, He's the first born... we'll revisit this at his 2 year checkup." Well, his 2 year check up comes along and still no words. My doctor finally decided we would get his hearing checked to start. Like I suspected, his hearing was fine. But this was the first step to getting some speech therapy. We went through the Early Intervention Program and they hooked us up with a multidisciplinary evaluation. There was our case coordinator, a med student, a speech therapist and a teacher. They would just have him do some basic activities, etc. Well, he clearly qualified for speech therapy. They also recommended an occupational therapy evaluation because they noticed a few things with his fine motor skills, etc.

He qualified for occupational therapy too, just borderline scores. So, as it turns out, some of his peculiar behaviors are making more sense. He got some Sensory Processing difficulties. He's a little more busy, active than most kids. He rarely sits down to do anything, wants nothing to do with watching TV. He likes to roughhouse and wrestle, crash, jump. This was explained to me that it takes a lot for him to be stimulated. He also has a very high pain threshold, which could give anyone watching him a heart attack. He has some low muscle tone in his mouth, which explains the trouble with his speech... and he drools a lot when he's concentrating on something.

This disorder manifests in different ways with different kids. There are various combinations of difficulties a kid could face. We've been doing therapy for 3-4 months and it has worked wonders. He's speaking much better. Everything isn't clear and he still needs to work on expanding his vocabulary, but we actually have conversations. He has been able to settle down to participate in some fine motor activites more and more. Overall, he's going to do well. He was born 1 month premature and it's possible he didnt' have enough time to cook. We didn't notice much because he's so good at his gross motor skills and those are the milestones that children meet typically in the first 12-18 months of life. We're lucky that we caught it relatively early. I asked the OT, if he didn't have the speech problems, how would we have noticed the other things. (I just figured he was a boy that liked to roughhouse... with the drooling, I just thought he was teething.) She said it probably would have gone unnoticed until school, where he needed to sit still for length of time.

I write this because if you have little ones and notice some different behaviors, you might want to get them evaluated. There's not a whole lot of resources yet on the internet, but I've found some books that I'm gonna check out.
Posted by Jen at 11:54 AM 3 comments:

Okay, it's finally seemed to hit a streak of 80 degree weather here in the northeast and my garden is finally starting to do good things. 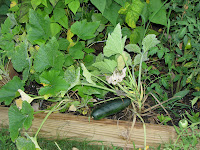 This is my lone zucchini. My squash plants were starting to die. And I managed to bring them back to life. 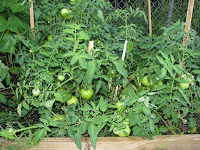 These are my tomatoes just waiting to turn red. I have a couple of heirloom tomato plants mixed in there too. 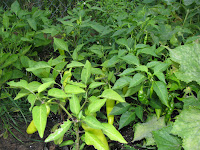 I have lots of hot peppers. I have hungarian wax peppers and you run of the mill green hot peppers! 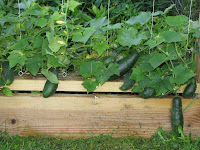 This is my biggest success. Cucumbers! This is about half of my total bounty so far, I figure I have about 13 or so of them that will be ready to pick soon.

My beans are just starting to come in to. For some reason I couldn't get my carrots or beets to grow this year. I had a great crop of snap peas. It made it all worthwhile to grow a garden when my son finally started to eat some of the peas.
Posted by Jen at 8:12 PM 2 comments:

So, this weekend I've been trying to get him to nap when he's been miserable. The summer humidity is kicking in and he's been very emotional. So, I tell him he needs to close his eyes and go to sleep. If he opens them, I'll say "Close your eyes". So last night, I'm telling him that it's bedtime and he needs to close his eyes. He says to me...."Mommy.......eyes." It took me a minutes to figure out that he was telling me to close his eyes. I just laughed.... I think he might just be smart enough to know that if I close my eyes, I won't be able to see that he hasn't closed his.....

Please bear with me.

Hi everyone. I have a lot of pictures to post.... however my computer has no more memory. I recently purchased a new one, I just have to get it up and running. Then I will have CSA, Farmer's Market and Garden pictures to post. This should happen this week.

Also, please check out the following site for some important information on Mesothelioma.
www.maacenter.org
Posted by Jen at 11:14 AM No comments:

How important regular check ups are.

Send your dad (and any dads that you know) an email Father's Day Card.
This card will remind him of the important preventative checkups that he should be getting.
Include your own personal message about how important his health is to you.

I am going to start posting more regularly. My garden is up and running. I just need to start taking some pictures. My computer at home has no memory, so it's such a hassle to post anything.... but I'm looking around for a new one. I've doubled the size of my garden this year.

I'm also hoping to get to the Farmer's Market.. I've had to work some Saturday mornings lately.

AND... this week starts my CSA deliveries. I think this first week is just going to be leafy greens but I will take pictures to show you what I've gotten. It's Wyllie Fox Farm and they do organic farming, although I don't think they're technically certified organic. But they do picking events during the summer as well. I'm anxious to get there and look around. It's about 1/2 hour from my house.
Posted by Jen at 11:19 AM 1 comment:

I've started my garden officially. Because I'm in the NorthEast, I need to wait until after Memorial Day typically to plant some things.
But the cooler weather vegetables are starting to grow.

I'll be snapping a picture soon.
And, farmer's market season is here. I'll be bringing back my weekly posts of the great bargains I've found.
Posted by Jen at 2:51 PM 2 comments: 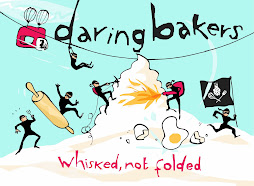